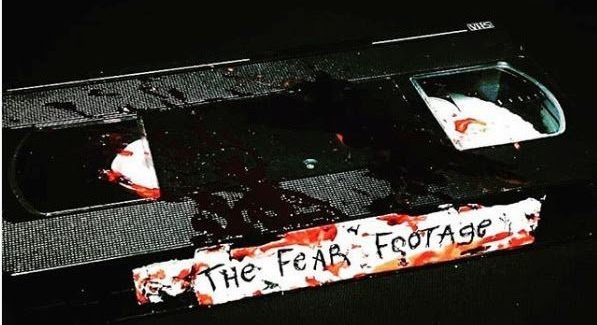 Written and directed by Ricky Umberger, The Fear Footage is a 2018 anthology film that tells its tales by way of the found footage format. Three otherwise unrelated tales of terror are book-ended by the wraparound story of Deputy Cole who has been called out to investigate a disturbance.

“On April 19th, 2016, Deputy Leo Cole of the Darkbluff, Maryland Sheriff’s Department vanished after being dispatched to 11628 Hangmanor Rd. The next morning, his body camera was found,” we’re told by text on-screen.

The disturbance? A house.

The catch? The house was the scene of a grizzly multiple homicide. Oh, and it was previously demolished.

As Cole investigates this phantom house, he stumbles across a VCR with a nondescript VHS tape inside which features only a white label showing the words “THE FEAR FOOTAGE.” Cole pushes the tape in and the TV flickers and we’re introduced to our first story.

Birthday Party – In this story, a young boy receives a camcorder for his birthday. He films himself skateboarding and playing video games as well as footage of an oncoming storm. He also watches a news story about the clown sighting epidemic that took place last year. As the storm rolls in, the boy sees one such clown holding a handful of red balloons outside his house.

At this point, officer Cole goes into the bedroom of a child named Megan, where he finds an ominous diary and gets some backstory on the events of the home. He then goes back to the TV and plays the second story.

Storm Chasers – A group of… storm chasers head out to… chase a storm but tragedy strikes when they are involved in an accident and stalked by a mystery group of hooded figures. They are chased through an incredibly creepy and claustrophobic series of hallways and encounter more than they expected.

As the TV flickers back to static, Cole starts to hear and see things that lead him to believe he may not be alone in this house and there may be more going on than he can comprehend. He plays the tape one more time.

Speak No Evil – A former drug addict starts hearing strange noises behind his house. He sets up a camera to prove to his estranged girlfriend that he’s not back on the junk. Eventually he heads out to investigate further. What he encounters in those woods is worse than any trip.

As the tape pops out of the VCR, the mysteries and secrets of the house are finally made visible to Cole as he finds escape much more difficult than he believed possible.

Found footage is a tired, played out sub-genre. However, it’s also still a very effective way for micro budget films like this to create a certain tone. While it’s annoying to see a major studio put out a film that’s crisp and professional looking while telling us it’s all footage from an amateur ghost hunter or scared homeowner, The Fear Footage actually looks like what it claims to be. It looks REAL.

A lot of the film is shown through the circular glow of a flashlight, allowing the director to focus your attention exactly where he wants it, as subtle or as direct as it may be. Umberger does the things that James Wan does well, creating atmosphere and creepy looking ghouls and creatures, without having to overly rely on jump scares or cheap frights. He focuses more on creating a lasting, chilling ambiance than a simple, quick skip of the heartbeat. That’s what I appreciate about low budget horror films, they actually have to use story and mood instead of relying on special effects.

The “story within a story” thing has been done and honestly kind of takes me out of the moment a bit. The more layers you add, the further it gets from reality. While the diary does tell us a little bit about the tape, I wish there was more backstory that led further credence to the stories contained within, something that would make us believe that the events being shown were legitimate and that Cole wasn’t just watching someone’s home made horror movies.

The thing about seeing a first time director making an anthology is that you don’t really know how effective they could create a full length feature that holds the audience’s attention and maintain that sense of tension and fear. While The Fear Footage is clearly a small budget, independent feature, it’s a strong first showing for Umberger. I would like to see what he could do with both a bigger budget and a longer story.

While you won’t find The Fear Footage on IMDb, the trailer promises a summer 2018 release and I encourage you to keep an eye on their Instagram for more info.