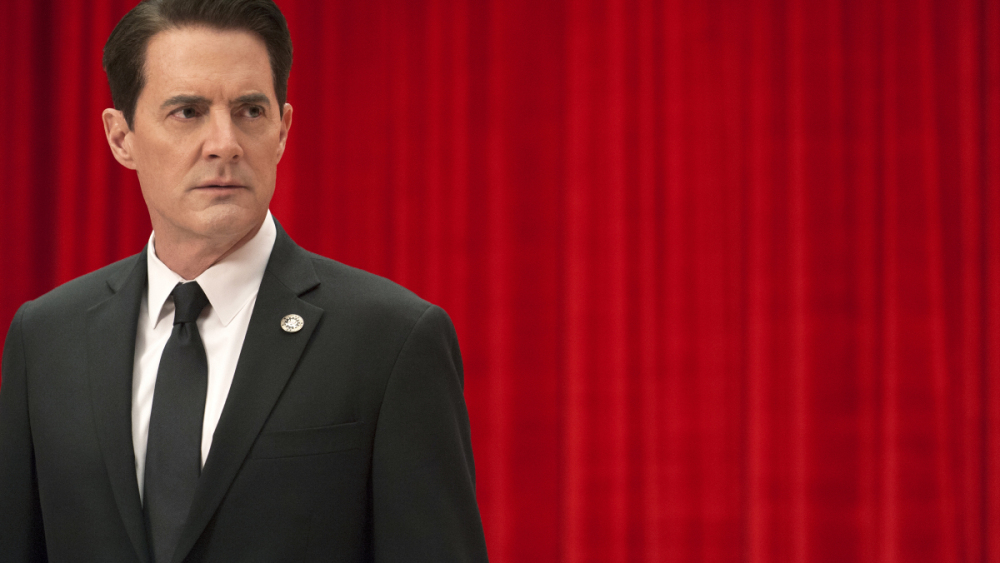 Warning: There will be spoilers for the first two episodes of the Twin Peaks revival ahead.

There’s no recapping the past here. Lynch knows that you know what happened in the first two seasons of the show and that’s why you’re here. While there are some flashbacks and vignettes from the original ABC series, they are done in a way to further the new story, not to rehash the past. “Is it future or is it past” asks the one-armed Philip Gerard (Al Strobel).

Agent Dale Cooper (Kyle MacLachlin) is still stuck in the red room of the Black Lodge. In the show, as in life, it has been 25 years (okay, 26 because of delays based on Lynch and Showtime’s negotiations but just be cool). He speaks to Gerard as well as Laura (Sheryl Lee) and Leland Palmer (Ray Wise). Laura tells him that even though she is dead, “still I live,” whatever that means. Cooper also speaks to Gerard’s arm, which once manifested itself as a red-suited dancing dwarf but now appears as a tree with some kind of… brain, or pre-chewed wad of bubble gum, on top and lightning bolts flashing around it. Weirded out yet? Well buckle up, buttercup, because we’re just getting started.

As Cooper is confined to the Black Lodge, his doppelganger, possessed by the otherworldly Bob, is roaming about in the world. Dark Cooper is brooding, his skin chapped and his hair long. His eyes are dark and emotionless. When asked “are you going to kill me now” at one point, Dark Cooper responds with little more than a cold, matter-of-fact “yes.” We, and even Dark Cooper, know that for the real Cooper to escape the Black Lodge, his doppelganger must be returned. However, Cooper has already left the Black Lodge. The arm-tree-gum-brain thing has sent him falling into a dark void where he crashes into a clear box in New York City.

Oh, that clear box. This appears to be the big mystery of the first two episodes. We see a young man in a large loft, sitting and watching this box. Multiple cameras point to the box and it’s the man’s job to switch the memory cards when one gets full. Each night he’s visited by Tracy, an attractive young woman who brings him coffee but can’t get close to him because of his top secret box-watching. The security guard out front won’t allow anyone in. However, the next night the security guard is nowhere to be found so the young man decides there’s no harm in letting Tracy in, just this once. Of course, this would be the night that the box fills with a blackness and some kind of faceless creatures breaks out and shreds the couple to pieces mid-coitus (Lynch takes full advantage of being on premium cable, showing nudity and dropping F bombs). This all happens after Cooper lands on the box, enters the box, swims around inside the box, then disappears back into the void.

The other side story takes us to Buckhorn, South Dakota where a murder has taken place. A woman named Ruth Davenport has been killed and her head was left in her bed, along with someone else’s body (so apparently at least two murders). Local school principal William Hastings (Matthew Lillard) is arrested after his fingerprints were found all over Ruth’s apartment. Hastings tells his wife that he has never been in this woman’s apartment except in a dream. This being Twin Peaks, such a though naturally conjures up thoughts of Hastings being possessed by Bob or Mike or some other monosyllabic supernatural being. However, William’s wife Phyllis (Cornelia Guest) calls bullshit and says she knows about his affair with Ruth. The lack of empathy in her voice immediately made me, and those I was watching with, suspicious of her.

Lynch appears to be trying to branch out with this new series, taking us to new locales such as New York, Buckhorn, and even Las Vegas for a very short and unexplained scene. However, there is still the main story arc of Cooper and Bob and other familiar faces pop in and out of the premiere as well. A sickly looking Log Lady (RIP Catherine E. Coulson) has a phone conversation with Deputy Chief Hawk (Michael Horse). We see now-married Andy (Harry Goaz) and Lucy (Kimmy Robertson) at the local Sheriff’s station. Dr. Jacoby (Russ Tamblyn) is now living in the woods and getting shovel deliveries, which is apparently a thing you can do. The Horne brothers, Ben (Richard Beymer) and Jerry (David Patrick Kelly), have a long conversation about Jerry’s new venture into the world of marijuana production. The premiere ends at the Roadhouse, where Shelly (Madchen Amick) and James (James Marshall) make eyes at each other.

We still haven’t seen Audrey Horne (Sherilyn Fenn), Bobby Briggs (Dana Ashbrook), Gordon Cole (David Lynch), or about 200 other cast members both old and new, but the debut of the series’ revival has cast a wide net of confusion and bewilderment that will keep at least this viewer tuning in to figure out just what the hell is going on.