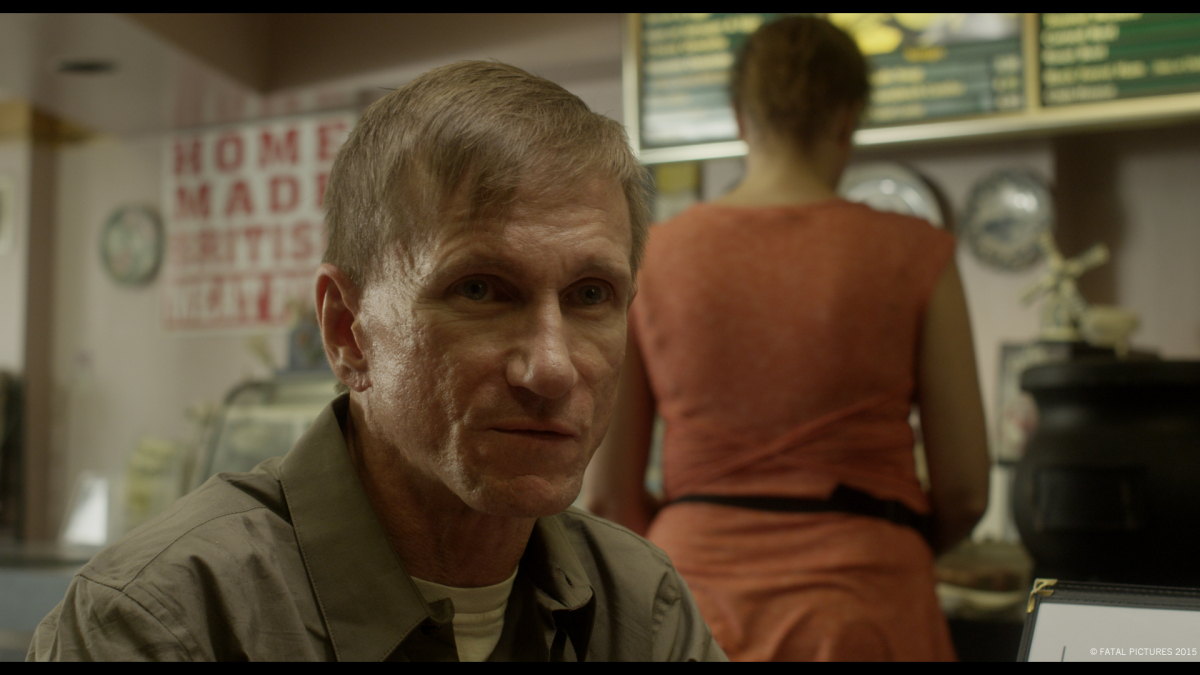 Fatal Pictures’ short film Heir is only fourteen minutes long, but it gives you a lot to process in that limited time.

The story, which bills itself as “a touching tale of father and son,” opens with Gordon (Robert Nolan), the aforementioned father. He is surfing the internet, chatting with an unseen partner, and setting up a play date for his titular heir, Paul. However, the tone of the film tells you right away that this is not going to be a fun day at the park or a trip out for ice cream cones. There is a much more sinister appointment in Paul’s future.

In fact, Gordon and Paul take a road trip to meet up with Gordon’s college friend Denis, played by indie icon Bill Oberst, Jr. Oberst is creepy as hell in everything he does (remember Take This Lollipop?) and this is no exception. From the outset, it’s clear that Denis has grim intentions for Paul. After wolfing down an egg sandwich, Denis takes Gordon and Paul back to his place, where he trades glances between the father and son. The way he looks at Paul is enough to make your skin crawl, lecherous and perverse. The way he looks at Gordon is equally evil but in a much different way; knowing and gloating. Gordon has brought Paul to this dastardly man reluctantly, and Denis wants to hold it over his head.

There’s already something off-putting about Denis, and truthfully the whole situation in general, but this is the point in the story where shit gets really dark. It turns out that Denis is not just a figurative monster, but a literal one, and he has some bad intentions for Paul. On top of that, Gordon is actually harboring a similar secret, displayed by an oozing wound on his hand that Denis urges him to let free. Gordon’s wife is also involved in a very troubling way that I won’t reveal for fear of divulging too much of the plot. The effects are all practical and are quite good, with a very disturbing Cronenburg-esque design. There’s lots of goo and other grossness that will cause anyone who wasn’t already feeling uncomfortable to now do so.

The whole thing is clearly a metaphor for child abuse, but I don’t think it’s one of those “get it?” type moments that can cause you to audibly groan and turn off the TV. It’s obvious, sure, but writer/director Richard Powell does a good job of not clubbing you over the head with a simile. While Denis feels free to let his inner monster out, Gordon is repressed and trying to hide his shame. It’s all deeply troubling when you stop and think about it.

Heir won the Most Effectively Offensive award at the Boston Underground Film Festival in 2016 and the Director’s Award for Best Short Film at Morbido Fest in 2015. It is a very well put together film and it moves along at a good pace, keeping you guessing until the very end. I enjoyed it and would recommend it. It’s dark, it’s disturbing, it’s uncomfortable, and it’s down right gross.

And that’s the point.