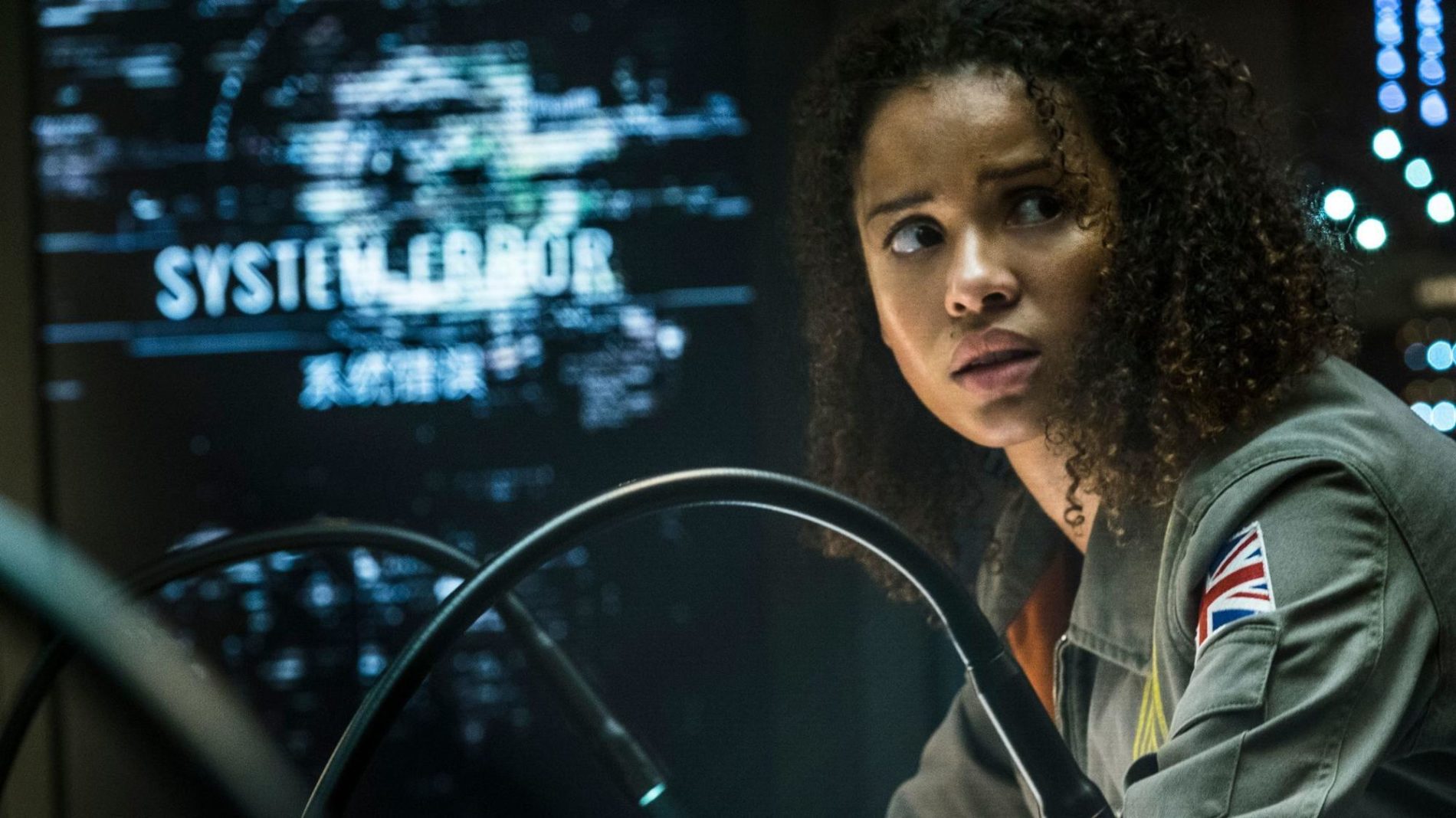 This film was made by Paramount for $40 million and purchased by Netflix for $50 million, saving Paramount’s ass. Paramount knew this film would flop out in the open market and Netflix came in to save the day at the last minute. Most people did not know this movie would come out until they saw the commercial during the Super Bowl.

Being a fan of the original I thought I would watch the movie right after my Eagles won the Super Bowl and told Taylor of Terror that I would be doing so. He asked if I would do a review for Grave Plot and here we are.

We open in 2028 and shock the world is in an energy crisis, the oil is almost gone! There’s a huge line at a single gas station. Here was first meet Ava Hamilton (Gugu Mbatha-Raw), she’s with her attractive doctor husband (Roger Davies) and they are talking about losing their two daughters in a fire. Nothing like straight exposition dialogue right off the bat. Whatever. Hamilton then drops the bombshell she’s going into space on a spaceship called the Shepard, which is just a large particle accelerator. If it works then the world never has to worry about energy again, but if it fails (according to conspiracy theorists) it’ll tear a hole in the space/time continuum and merge multiple parallel universes.

Hmmmmm… I wonder what is going to happen in the next hour and create the inciting incident?

We are then introduced to the rest of the cast in short order as we tour the ship; Kiel (David Oyelowo), Schmidt (Daniel Bruhl), Monk (John Ortiz), Mundy (Chris O’Dowd), Volkov (Aksel Hennie), and Tam (Zhang Ziyi). These are the best and brightest from around the world (if you can’t tell by the names). We also are introduced to a huge tub of worms. Not like earthworms, they look alien.

This rag-tag team tries to get the accelerator to work, but it doesn’t — failing time and time again. Around two years later something finally goes right… and then very wrong. The accelerator works for a bit, everyone gets excited, then it shorts down, there’s explosions, fires, but the ship stays intact.

Oh, I forgot to mention that while this was all going on and they worked to restore power, they lose sight of the Earth and they find Jensen (Elizabeth Debicki) in one of the ship walls and fused with a bunch of wires. While they are questions about where she came from, she casually drops that she is from another dimension/universe, then they find out their navigation gyroscope is missing.

The movie is pretty decent up until this point and this is where it goes completely sideways and weird.

Volkov starts having a drug trip, thinking there are worms under his skin, so he makes a gun on a 3D printer for some reason and holds the crew hostage. He convulses a lot, throws up blood and the worms, dying right in front of everyone. Oh well, let’s just throw him into a body bag in the fridge and call it a day.

Next up, Mundy is working on repairing the ship when the wall he’s leaning against goes liquid for some reason and sucks in his arm. After trying to get his arm out, it gets hacked off but there is no blood, no pain. His arm is gone. Then moments later it reappears and wants to WRITE something for the crew! The arm says to cut open Volkov, so they do an autopsy where they find the gyroscope.

They get the ship back online and discover that they are now in another universe and in their current universe the Shepard has crashed into the Atlantic two days before. Jensen says that Hamilton in this universe never came up to the ship and was back on Earth to be with her two daughters who aren’t in fact dead here. Jensen is the one who took her place in this universe. The plot thickens with twists and turns.

Back on Earth all hell is breaking loose. Hamilton’s husband is driving through a wasteland, he finds a little girl in the destroyed hospital in which he used to work. Then, through the smoke he sees the silhouette of a large monster. We’re officially a Cloverfield movie! I’m guessing this scene was written after Bad Robot bought the film.

Now the pacing picks up. Mundy is killed by a magnetic explosion which almost destroys the ship, Captain Kiel needs to free a space accelerator engine or the whole ship might break up. He sacrifices himself in a very underwhelming fashion, but he does save the ship. Tam is then randomly locked in a room which begins to fill with water for some reason. The pressure from the water is so much in this room that it breaks through the hull and freezes Tam instantly because it’s really fucking cold in space.

Back in space, Jensen knocks out Hamilton, kills Monk, and wounds Schmidt, saying that the ship needs to stay in this universe. Once Hamilton wakes up, Jensen says they can call kill her on Earth and she can jump into her life and have her daughters back. Hamilton is conflicted for all of two minutes and shoots Jensen through space. Schmidt and Hamilton get the Shepard back to their dimension. They call down to NASA’s Marshall Space Flight Center in Huntsville and tell them that they are going to come back to Earth. They are all like cool, come back down! Huntsville calls Hamilton’s husband, who is locked in a bunker with that little girl from before because monsters are rampaging about and The Rock isn’t available to stop it. He screams for them to tell his wife to go back. Don’t come back to Earth. And Huntsville was all like, “Sorry, homey. TOO LATE!”

The rescue capsule with Hamilton and Schmidt comes down to Earth where it may or may not have been eaten by a monster that was the size of Mt. Everest. I checked out about 45 minutes earlier and stopped paying attention.

If you want to get drunk and watch a stupid sci-fi movie this is for you. For the most part nothing made sense, nothing was ever wrapped up or explained. There was a lot of bad throughout this movie. The acting wasn’t half bad and kept me from straight up turning this off.

Yeah, this movie was hot garbage.